A03
Knowledge and Goods II: Communicative Actions of Consumers and Intermediaries

In the first funding phase, the subproject “Knowledge and Goods” used the example of buying and selling fresh fruit and vegetables to investigate the communicative actions of consumers belonging to different social milieus in four Berlin neighborhoods as well as those of retailers (so-called “intermediaries”) as actors in the commodity chain. The subproject carried out basic empirical and theoretical work in terms of (1) determining the spatial conflicts between territorial space, trajectorial space, and places that arise from the interweaving of consumption contexts, contexts of market withdrawal, and production contexts. (2) The knowledge held by consumers and other actors in the commodity chain includes spatial knowledge and plays a key role in maintaining circulation along the commodity chain. (3) Spatial knowledge needs to be polycontextural because (a) production, sales and consumption contexts each exhibit different spatial references but are linked along the commodity chain, (b) markets inherently set up a spatial conflict between territorial and trajectorial space at points of market withdrawal, and (c) actors within the market reflect the polycontexturality of commodity circulation more strongly with increasing mediatization. (4) Spatial knowledge includes non-knowledge, which constitutes a central strategy for resolving spatial conflicts in everyday life. (5) Given the extent of non-knowledge, circulation along the commodity chain can only be maintained because objectivations (goods, store, districts, traffic routes) are symbolically charged, act as carriers of knowledge, and stabilize the circulation of goods.

By analyzing the interplay of spatial knowledge and spatial order, the project has made a significant contribution to specifying the concept of polycontexturalization and its reciprocal dynamics with translocalization and mediatization. From its conception, the project has followed a generalization strategy for a specific spatial order (Berlin as an example for the Global North). Building on its results as well as additional preliminary work conducted by the project leaders, the second funding period will include a comparison with two divergent spatial orders, namely Nairobi (Kenya) and Singapore – cases that form a maximum contrast both to Germany and to each other. The project thus follows the aim of the CRC’s project area A to examine action-relevant knowledge in contrasting spaces. Even more so than in the first funding period, the project takes a systematic look at why and how knowledge is distributed unequally among different social actors in the commodity chain as well as material infrastructures, and how it can serve as a resource of power. 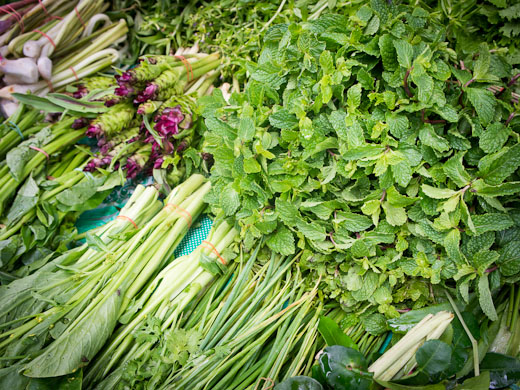 Baur, N. (2019). Linearity vs. Circularity? On Some Common Misconceptions on the Differences in the Research Process in Qualitative and Quantitative Research. Frontiers in Education, 23(4).

Using the example of fresh produce trade, the research project investigates: (1) the specific spatial knowledge of consumers (from various social milieus) and producers (as actors in the supply chain); (2) how both draw on this knowledge when buying and selling fresh vegetables; (3) how actors refer to different spatial arrangements while interacting (i.e. act polycontexturally); (4) the role of the traded goods as objectifications of communicative action in these interactions; and (5) current changes in this specific spatial knowledge due to the re-figuration of spaces.

We start from the assumption that consumers’ and producers’ knowledge (including spatial knowledge) plays a key role in coordinating value chains. During coordination processes, goods (as objectifications of communicative action) are symbolically charged to become carriers of social meaning. This knowledge is necessarily polycontextural, since the value chain interlinks different contexts of production, selling/buying and consumption, and these contexts have different spatial extensions and references. Moreover, consumers increasingly have to handle the polycontexturality of value chains as a result of mediatisation. It may even be that consumers do not have any spatial knowledge of food (‘Nichtwissen’). Spatial knowledge (of the value chain) may thus be explicit, implicit or non-existing – and hence relevant or irrelevant for interaction.

As knowledge varies between social milieus, we systematically investigate how different milieus interact with producers. We particularly focus on four urban districts in Berlin, each of which is predominated by a distinct (and contrasting) social milieu. In each of these districts, we theoretically sample consumers and producers. Using a mixed methodology design combining qualitative and quantitative geographical and sociological methods, we ask: who has which spatial knowledge, how do subjects act upon it, how has this knowledge changed, and how is it used for maintaining and changing value chains and their spatial organisation.

We will focus on the market for fresh produce, because (1) the value chains are especially complex there, linking a multitude of actors from different locations, and because value chains of different spatial extensions (local, national, global) exist in parallel. (2) Food is, on a symbolic and social level, exceptionally important and plays a crucial role in all cultures in constituting local identities. We therefore assume that consumers’ food-related knowledge strongly varies between locations. (3) The specific material properties of fresh produce compel us to also analyse the tensions between material and symbolic aspects of space.